Check out information about tax credits and rebates!

Located in beautiful Ponderay Idaho. Patriot Energy Systems is focused on clean, cost effective renewable energy with a zero carbon emission footprint. Our products are stackable, linkable and daisychianable, providing any amount of power you require. They are silent and when deployed have no moving parts to freeze or break. 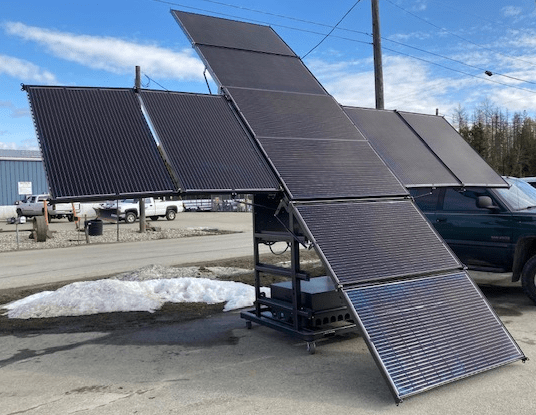 Thomas has been involved with solar technology since the mid-1970s as an engineer for Sandia Labs. Prior to creating Patriot Energy Systems, Thomas co-founded Empower Global Group, Inc. in early 2013. A volunteer Community Emergency Response Team in Bonner County, Idaho. Thomas works with Search and Rescue and EMT programs along with volunteering for the Spirit Lake Police Department.

Jason Johnson is a second-generation North Idaho native. He originally started his own engineering company, Golden Rule Manufacturing before partnering with PES to do what he does best, create some of the most innovative products on the planet! Along with creating many innovations, Jason has been the main designer of the structure that allows us to harvest energy from the sun!

Brendan Mooney was the Executive Technology Director at a targeted marketing company in Virginia Beach, but resides in North Idaho. He managed all IT operations remotely along with project management of client work.

He previously served as an IT Senior Technologist at one of the largest defense contractors worldwide.  He served as a network design specialist supporting DoD and other government clients in classified security environments.  Brendan Mooney holds a active Top Secret clearance with Security+ and ETA fiber optic tech/installer certifications.

For 4 years he has developed a successful private company Leadout Systems.  He assists businesses of ranging sizes and non-profit organizations to consolidate and modernize their IT systems creating integrated and secure communications to small business multi-site locations.

Brendan is now managing partner for Patriot Energy Systems and helps maintain the company in its journey to provide transportable energy!

We are a Pacific Northwest Company, so who better then to be our National Sales Director then …… SASQUATCH!

Raised in N.W. Montana, Sasquatch served in the United States Navy for 20 years. There for working for PATRIOT Energy Systems is right up his alley. After retiring from the Navy, Sasquatch has worked his way up the sales ladder from green pea salesman to lead salesman, trainer to General Manager.

He now owns several businesses including a Sales/Staffing/Training company. He brings with him a sales team across the U.S. to help you with your portable solar needs.

His “Outside the box” thinking has helped push Patriot Energy Systems to the next level and expanded us from a National Company to an International Company.

Patriot Energy Systems has all the right pieces on its Team to get you the Best Portable Energy/Solar System. So, give Sasquatch and his crew a chance to show you what they can do.

From system orders to financing to arranging transport and set up. Patriot Energy Systems and the Sasquatch are there for you!